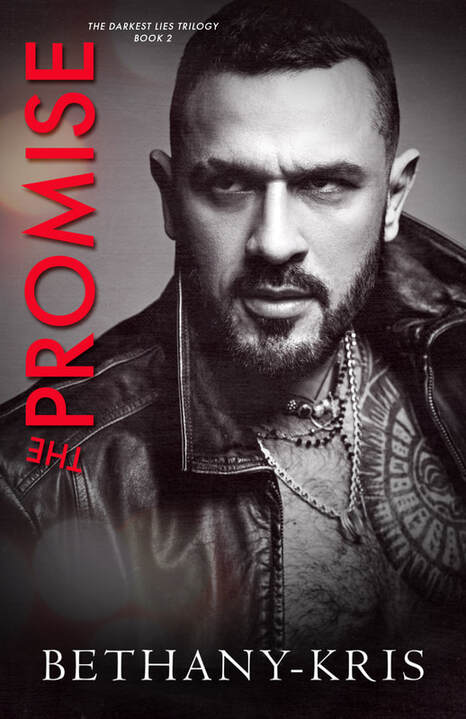 Roman Avdonin has always lived life on the edge of reason—hiding an unstable woman while officials knock down his family’s door and a mafia war brews really doesn’t seem that crazy, all things considered.
But everything about Karine Yazov is a beautiful, dangerous lie. And they’ve not even learned the worst of it.
All she knows is how to survive, and put into the hands of a man who seems like her wildest dreams, why would she fight? His stare lights her on fire, he gives her the safety she craves, and Karine can’t stop herself from falling …
Even if she knows the monster chasing her will never let her go.
Promises like his shouldn’t be broken, but secrets like hers could get them all killed.
*
The Promise is book 2 in The Darkest Lies Trilogy. The Trilogy is standalone; the books should be read in order.

“Why did you do this?” Karine asked, well-aware that some time had passed since she last said a word. Within the city limits, everything was new to her. Each building, every block … she tried to take it all in, and Roman said nothing while she did so. She’d never been anywhere but Chicago. Yet, even there, she hadn’t done much exploring of her own city. At Roman’s questioning glance, she added with a shrug, “Take me, I mean?”
It was a question that wouldn’t leave her alone—the problem was that she could come up with a million answers of her own, and none of them were good. He didn’t answer straightaway, but he didn’t seem like he was trying to come up with something just to say it, either.
Was he ignoring her—changing his mind about bringing her with him, maybe?
She couldn’t decipher this man. His mind was a place she couldn’t reach, but she suspected it was nothing like her own. Her belief that he wouldn’t hurt her, not for as long as he assumed responsibility for her, did nothing to assuage the other questions she had.
Like what if he woke up tomorrow morning, and decided he didn’t want to deal with her anymore?
It was then, as she tried to avoid his gaze that kept slipping her way, that she noticed the bruising on his wrists. The blackened-blue marks were too fresh. She’d been thinking he kept holding tight to the wheel because he was angry—those grimaces and hard stare was further proof—but suddenly, she didn’t think that was the case at all.
Karine couldn’t help but ponder if those bruises were in anyway connected to what caused him to walk into her bedroom in the middle of the night, and take them away. She had a feeling he wouldn’t tell her even if she asked him.
“I don’t remember any protests when I suggested this plan last night,” Roman replied, arching a brow her way as he rolled onto a bridge behind a line of taxi cabs.
She didn’t miss it.
How careful he was—how he posed each word as to not suggest something that might set Karine off. He clearly hadn’t forgotten that breakdown in her bedroom the night they spent together.
Karine chest tightened all the same—she didn’t have the words, or maybe the vocabulary, to explain to him how overwhelmed she was. At everything, constantly. He didn’t make it better, even if he might sometimes make it easier. He had offered an opportunity that couldn’t be refused, but now she wanted to know the truth.
What did it actually mean?
Before she could ask; Roman continued speaking. “You could ask me about your father, about—what he’s done or is going to do. You could ask anything, Karine, but what you do is question my intentions. What makes you think I had a choice in any of this—that even this car that isn’t mine is somehow part of my plan?”
He didn’t look at her while he spoke that time, but she was suddenly grateful for that. Not even the obsessive, undeniable attraction she felt for the man was enough to soothe the way his words stung her skin.
She had asked.
At least he was honest.
Karine tried to find an appropriate response, but the words were lost to her murky mind as Roman pulled the vehicle off the road, and into the underground parking lot of a tall apartment building with windows that looked like panes of chrome, and high, black brick walls. A thrill ran down her spine at the sight.
She didn’t know much about New York, but at the very least—well, the movies had been right.
It was glamorous.