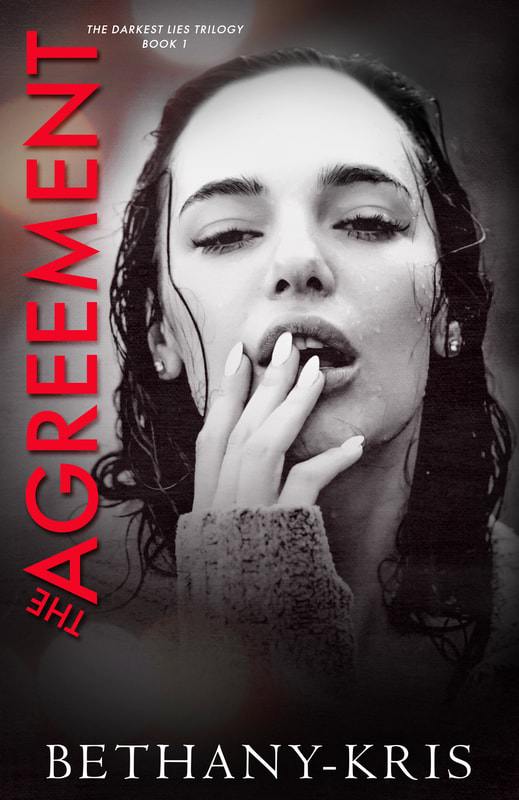 Criminal. Spoiled. Entirely out of control.
Roman Avdonin has heard it all. None of it stops him from crossing the line one more time. Sent to Chicago to answer for his wrongs, he’s an outsider beneath the cruel gazes of men who are nothing like his own. He should have minded his business and paid his dues—a better man would.
But then he laid eyes on her.
Karine Yazov.
She’s forbidden—already promised.
Fragile in every way.
And he just can’t help himself.
Agreements like these?
They can’t be undone.
*
The Agreement is book 1 in The Darkest Lies Trilogy. It is a standalone trilogy; the books should be read in order.

“It started with a bit of cocaine.”
A dark chuckle sounded from Demyan Avdonin’s left before his friend—one of his oldest—replied only, “Don’t all the best stories?”
Side by side in matching leather bucket chairs that faced a familiar landscape, in one of the best parts of New York City, the two men shared a laugh that Demyan hadn’t realized he needed. He wasn’t the type to spill his family’s secrets—or their problems.
His adult son was certainly one of those.
“If only it stayed that way, though,” Demyan added after a second.
Maxim hummed under his breath. “This is a life of temptation, and we’re men made for it, Demyan.”
Maybe so.
Sighing, he told Maxim, “I don't think I ever taught him how to tell himself no.”
He didn’t need his friend to say what he already knew—that was a lesson no man in their life could afford to miss. Except, apparently, if it was Demyan’s son.
Roman Avdonin had a knack for pushing every limit—testing each line drawn for him. It didn't matter the man or the establishment making the rule, he swore his son was born to break them.
Men, that was.
Better men than him, anyway.
And rules.
Couldn’t forget those.
Demyan didn’t have a proper excuse as to why he felt the need to discuss his personal issues with Maxim during the man’s very short visit to the city, but here he was--who the fuck else is listening?
At his left, Maxim jerked a hand his way, the cigar between the man’s fingertips losing an ash on the way. It fell to the shiny floor of a townhouse Demyan used for occasions just like this. A last-minute meet up with an old friend in the business—the mafia. It wasn’t often that the bosses of rival bratvas became friends, even if their business rarely overlapped.
The two were an exception to the rule—mutual respect, a bit of distance between their territories, and easy conversation helped the friendship along. He didn’t particularly like all the man’s business, but he’d also never dropped it on Demyan’s doorstep, either. Maxim never asked questions that probed too deep unless Demyan offered—especially about his family—and he handed back the same courtesy.
Claire, his wife, liked to say Demyan didn’t have enough friends, and he should make the effort to keep the ones he did.
Or at least the ones he liked.
Maxim was that friend—so, yes. He dropped everything for a fifteen-minute conversation in a mostly empty townhouse in a room full of cigar smoke because his counterpart never went anywhere without one at his lips.
Demyan didn’t really mind.
“He’s found himself some trouble, then, no?” Maxim asked.
Demyan kept his gaze on the bay windows overlooking the Hudson, and the view across the river. Boats skipped fast and slow over the water, and for a moment, he said nothing as he watched them go.
What was there to say?
He’s a grown man.
Roman can make his choices.
My son might get himself killed.
All of those were true, and more. They were also very telling about how Demyan felt, and he wasn’t keen on going there. No man in his position did, considering the risk.
“Nothing that he hasn’t managed to find his way out of,” Demyan eventually muttered. “So far.”
“I could help with that.”
The offer made Demyan still in his chair. He didn’t glance his friend’s way, but as his mind mulled over the offer—and implications—he already knew his answer. He didn’t really need to think about it.
His love was loyalty.
It would always be his weakness.
“I’m not interested in setting up my son to get him under control, old friend,” Demyan murmured, reaching for the glass of vodka on the table between them.”
“Well, that’s the best part,” Maxim replied, striking a bemused grin. “Nobody said you had to do a fucking thing.”
Demyan sipped his drink, and said nothing—he didn’t agree, or otherwise.
Well, he thought, so be it.