​“Daidí!”
All five-years of Connor O’Neil stumbled over his own steps as he tried to yank on the rubber boots and run at the same time, down the hallway toward his dad’s office.
“Stopped raining, it did! Can I go outside now?”
Rolling over to his back, Connor pulled the rubber boot on properly and turned back to his knees. Pushing his arse back up off the floor, he ran the rest of the way to the office without stumbling once.
His dad always said he was too excitable.
That he had no patience.
And he should watch more and not shout as often.
Because people who spoke less, heard more.
Connor didn’t even understand what those things meant.
“Daidí!” he shouted at the office doors.
He wasn’t supposed to just barge right in, if the doors were closed, but it’d been raining for a week, and he was what his father liked to call a sickling. He didn’t know what that meant, either, but when too much wind blew into his ears, they ached. And if he got too wet by rain, he was coughing awfully terrible the next day.
Not today, though.
The rain had stopped.
He wanted to play.
Usually Lela—his father’s maid—would take him out, but he couldn’t even find her.
Grabbing the doorknob in his wee hand, Connor turned the latch and pushed the door open, barreling into his dad’s office.
He found the maid.
And his father.
Connor blinked, taking in the odd scene he was seeing.
Something five-year-old lads didn’t know.
On her knees in front of his father was the maid, her mouth open, and his father’s prick sliding in between her lips.
Even in his head, Connor whispered that word--prick.
He wasn’t supposed to say it, that’s what the maid said.
His father—Sean—had a handful of the maid’s hair and looked to be pulling it fiercely. Like it must have been hurting her, but Connor didn’t know.
Connor knew he’d done wrong barging into the office without knocking, but he’d shouted.
He’d shouted.
So, he couldn’t be in trouble for this.
His father always said he was too loud, so how come he didn’t hear?
He always heard everything else Connor did.
He’d whip him hard with a belt for being too loud.
Connor didn’t want to get whipped, and he didn’t want to have to pick a switch, either. So, he stepped back, grabbing the doorknob and pulling the door shut behind him.
But before the door closed completely, he glanced back in, curious and heavy in his tummy. The first thing he realized, was that his father had noticed him.
Sean was looking straight at him, quiet and smiling.
It wasn’t a nice smile.
Connor wanted to shut the door, but he couldn’t move. He couldn’t move because the second thing he realized was no, the maid was not enjoying what she was doing, and she was in pain. Because his father’s other hand was around her throat.
She gagged, and choked. Her face was red—eyes wide and lips a wee bit blue.
Stop, Connor wanted to say.
He liked this maid, but she was not the first. Many had come before her, and depending on how smart she was—and how well she could please his father—her stay might extend longer than the few months that was usual for their maids. Then again, maybe not.
Connor closed the door, still heavy in his tummy, but not as curious now.

Connor awoke when he was kicked from his bed. He couldn’t see straight in the dark, and he didn’t even know what had happened, except that he was lying on something much harder and colder than his bed.
He only figured out he’d been kicked out of his bed when Sean’s boot connected with Connor’s arse a second time.
“Move,” Sean said, amusement coloring up the anger in his words. “Don’t make me tell you again, lad.”
Connor still wasn’t sure what in the hell was going on, and he didn’t move nearly fast enough to please his father’s rage.
“Feckin’ useless thing, I said move!”
Sean didn’t need Connor to do a thing, as he found a handful of his hair clenched in his father’s fist before he was thrown a good three feet across his bedroom floor.
“Thought I’d forget about what you did earlier, did ye?” Sean asked.
Connor didn’t get the chance to respond. He only heard the whistle of the leather belt cutting through the air before he felt the pain. The kicks and hair-grabbing had been nothing—those were things that he was used to, but not the belt.
That always hurt.
Even when he braced for it, even when he had time to know it was coming, and even when he didn’t, the belt hurt.
Connor cried out at the first strike, falling over on all fours just as the second hit from the belt came to land across his back.
“That’s better,” Sean said, “pigs walk on all fours. Just like you should be. To the hole, lad, just like you are.”
His father made the noises of a pig as he beat Connor over and over again, all the way to the familiar rug that smelled like piss no matter how many times it was washed. Sean waited, not using the belt or saying a thing as Connor pulled back the rug to expose the wee hatch that opened up all too easily under his tiny hand to expose a hole in the floor.
It was dark in there.
Smelly.
Cold.
He hated the hole.
Still, Connor slipped down inside, fearing another swat from the belt was sure to follow if he didn’t get in before his father told him to.
Up above, Connor saw the sliver of Sean’s pleased smile before the hatch was closed, and the latch was turned, locking him inside. Through the cracks, just big enough to let light through, he saw the streams of color fade as the rug was tossed back over the door in the floor.
It was dark again.
He wouldn’t sleep now.
Instead, Connor waited for the maid.
She would bring him water.
Maybe a toy or a snack.
She always did.
Except, she didn’t come that night. 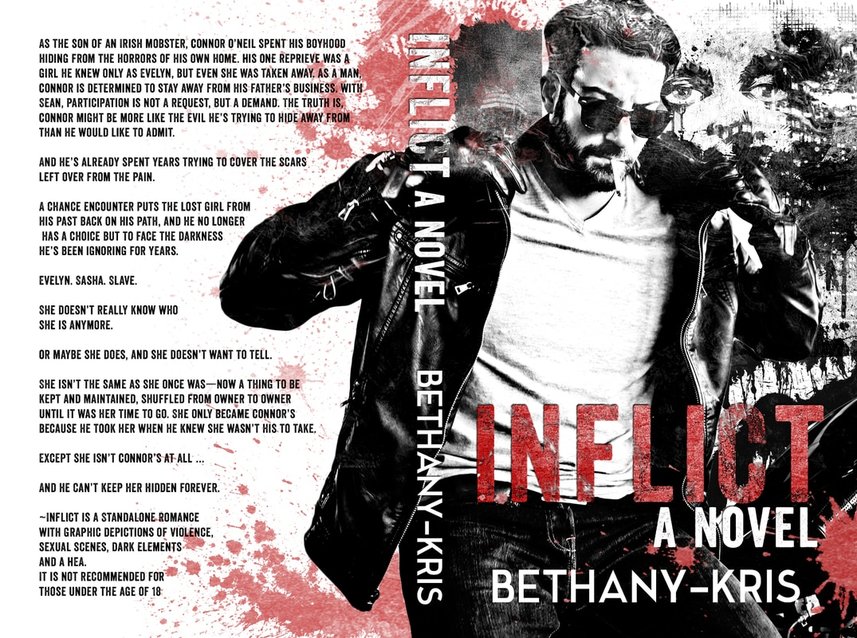