Calendars were things made by the Devil, surely. Each time Cecelia Marcello looked at one, she was reminded of something else she had forgotten to do. Or a birthday coming up. Someone’s school event. Holidays.
Too many things, too little hours, she thought.
It was always something.
Really, she wasn’t too surprised. It was expected with a family like the Marcellos. A family as large as theirs was always navigating tasks, important happenings, and all the while, trying not to step on someone else’s toes.
Her three sons, their wives, and their children certainly made for interesting weeks.
Lucian, their oldest through adoption, and his wife Jordyn had three children. Two girls, and a boy. A very wild boy. Cecelia thought her oldest and his wife were finally done having children, as they assured that was the case, but she didn’t know for sure. Anything was possible, and she was hoping for at least one more grandchild.
Dante, their oldest biological son, and his wife, Catrina, had two children. One girl that was far too much like her mother, and an older boy that was far too smart for his own good. Those two siblings fought like cats and dogs, but Cecelia usually found herself amused by the two more so than annoyed.
And finally, Giovanni. Their youngest, and the most rebellious of their children. He and his wife, Kim, had given them only one grandchild. Little Andino. At six, almost seven, Andino was not the handful his other cousins could be. He was a quiet boy, always looking out for others, and sweet as could be. Cecelia, at first, had been sad that Giovanni and Kim chose not to have more children after Andino, but now …
Well, she supposed if they were only going to have one, a perfect principe was just as wonderful.
“December seventeenth,” Jordyn said over the phone. “That’s for John’s Christmas concert.”
“And Liliana’s kindergarten Christmas concert?”
“Same day—in the morning. Supposed to start at ten.”
Cecelia frowned. “I suppose we’re lucky that Michel is in the same school as John. That saves a date.”
“Not Andino, though,” Jordyn pointed out.
No, because Giovanni refused to put his son in private schools. It wasn’t the cost, but rather, her son wanted Andino to be around all kinds of people. Not only spoiled, rich, white people. Cecelia had once pointed out that Giovanni had gone to expensive, private establishments, but all she got was a dead stare in response.
Sometimes there were things better left unsaid.
This was one of those.
“Andino’s Christmas concert is on the sixteenth,” Cecelia said, tapping the date on the calendar with the tip of a sharpie marker. “Thankfully, it all works out.”
Jordyn laughed. “Yeah, this year, Cecelia.”
“Mmm, I know.”
“Next year, Catherine will start school. The year after that, Cella. Someday, things are not going to coincide so well with your plans. Someone will have to deal with not seeing their grandmamma and grandpapa there. You know that’s okay, right? We understand.”
Perhaps, but Cecelia didn’t.
“It is okay if you miss an event or two,” Jordyn said again.
“Not if I can help it,” Cecelia replied.
Jordyn sighed. “I’m just saying.”
“How are you doing, darling?”
“I’m okay.”
“Really?”
“Well …”
Cecelia turned away from the calendar to lean against the island counter. “Missing Lucian?”
“It’s a very big house to be in when you’re here alone.”
“I bet.”
“Ninety-eight more days,” Jordyn said quietly.
“Maybe less, with good behavior.”
Jordyn laughed. “He’s a well-known Mafioso in jail on an illegal weapons charge. His last name alone is what’s going to keep him in for the full sentence.”
Already, Lucian had been in for a couple of months. It would be another three before he was home with his wife and children. It broke Cecelia’s heart because he was so adored by his family, and missed. The law did not care, though.
“He’ll be home soon,” Cecelia said.
“I know.” Jordyn cleared her throat. “Well, I just called to let you know the final, for-sure dates of the kids’ concerts. I was thinking of stopping by tomorrow, too, if you didn’t mind.”
“Of course, I don’t mind. You could also drop off John, Liliana, and Cella, if you wanted. Take a night for yourself—a break. We all need them. You more so than others, right now.”
“Well …”
“Jordyn, drop them off and give yourself a break. Okay?”
Finally, her daughter-in-law said, “Okay, Cecelia. Thank you.”
Soon after, Cecelia hung up the phone. Once more, she turned to the calendar on the wall, and felt like the damn thing was haunting her. Between all the grandchildren’s events coming up, a visit to see Lucian in jail, a charity auction she had agreed to help put on, and all the church functions … it was going to be a very busy Christmas.
That wasn’t even starting on the New Year.
Still, there was only one thing Cecelia could think that she wanted. As usual, her husband would do something amazing. He would give her something spectacular. Antony never failed in that regard, even when she told him year after year that he didn’t need to do that sort of thing.
Yet, she wished for her family. All of them, for at least one single day, to be in the same house together. It was getting harder and harder to do as the kids became older, and focuses changed. Just once more … she wanted them all together.
Or at the very least, happy.
Surely, that wasn’t too much to ask.
Heading to the table, Cecelia grabbed the rolls of wrapping paper that she had forgotten on the floor when the phone started to ring. For now, she would settle herself on wrapping presents, and finish decorating the main rooms of the mansion.
That in itself was a job meant for an army.
It was only December first, after all.
They had time to figure out the rest. 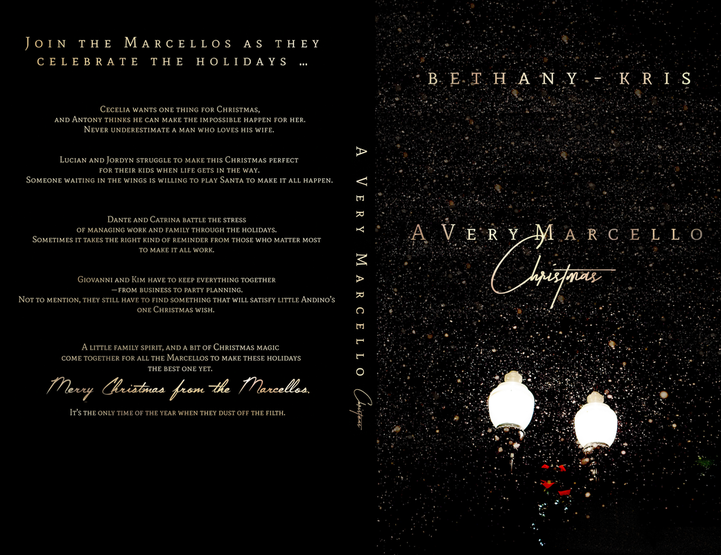